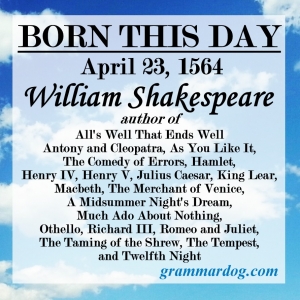 Harold Bloom, Yale University professor and Shakespeare scholar, observes that Shakespeare’s writing marks the beginning of the modern era and our idea of what it means to be human. Shakespeare explored human fears, virtues and flaws, giving each character a psychological profile and inventing complex relationships that still spark debate. Did Lady Macbeth force her husband to murder by questioning his manly courage? Or would Macbeth have killed the king anyway without his wife’s taunts?

If you once had to memorize a Shakespeare passage, try to recite it again. Chances are you will discover fragments of Shakespeare’s verse in the cobwebs of your mind. If you never had to learn a passage by heart, try memorizing a few lines. Here are some short quotes worth committing to memory:

“Cowards die many times before their deaths. The valiant only taste of death but once.” (Julius Caesar, Act II, scene ii, line 32)

“The quality of mercy is not strain’d. It droppeth as the gentle rain from heaven. (The Merchant of Venice, Act IV, scene i, line 184)

“To be, or not to be: that is the question. Whether ‘tis nobler in the mind to suffer the slings and arrows of outrageous fortune, or take arms against a sea of troubles . . . (Hamlet, Act III, scene i, line 55)

“We are such stuff as dreams are made on, and our little life is rounded with a sleep. (The Tempest, Act IV, scene i, line 156)