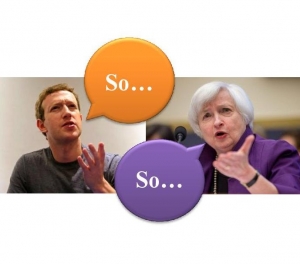 Yes you can start a sentence with so, but try to avoid saying, “So . . . you can start a sentence with so.” The introductory so is a verbal virus like well, um and like. It's not incorrect but it sure can be annoying. It's nerdspeak that started in Silicon Valley years ago and has since spread across the country. In TV interviews Facebook founder Mark Zuckerberg begins almost every sentence with so, as does Federal Reserve Chair Janet Yellen. Economists, scientists, engineers, and computer experts who attempt to translate complex information into layman's terms often signal the translation with “So . . .”

Not every introductory so is annoying. We all say things like, “So how was your vacation?” or “So have you decided on a college?” When Zuckerberg and Yellen start sentences with so, the usage is non-viral. When the introductory so creeps into everyday usage by ordinary people, that’s a virus, a speech habit that sounds condescending. If someone talks down to us, the tone makes us feel so-so, especially when that so-and-so intentionally assumes a superior attitude. So lose the so.